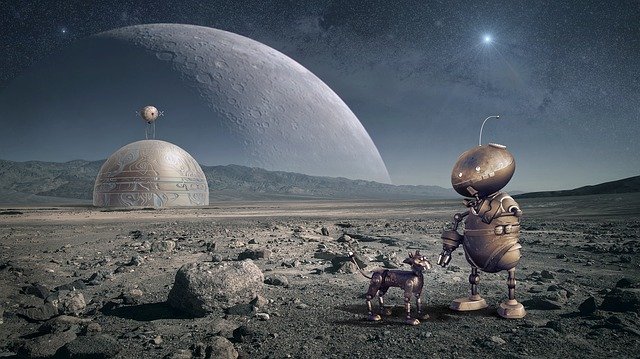 China Mieville is an author whose works all stick out in my mind compared to the relatively bland fantasy that I’ve read. Like how my Croco casino login sticks in my mind compared to all my other logins. There’s just something so unique about his work- about the sheer weirdness and insanity that he puts to paper in a fluid artistic prose that’s so completely different from anything else I typically read.

His vague and flowery writing style makes it hard to follow what’s going on between scenes A, B, and D, but the ideas and words he pens end up being so distinct that I can’t really be mad. Perdido Street Station, The Scar, and Kraken are so wild and distinct from typical Tolkien derivatives that I can recommend them on that basis alone. There is no author who deserves to be put in the genre of “Weird Fiction” than China Mieville.

This brings us to Embassytown- a science-fiction novel that distinguishes itself from most other Mieville by being fairly coherent and straightforward. For a Mieville book, that is.

Our story follows, in the first person, the life of a woman named Avice. She lived and grew up in Embasssytown- a pocket of terraformed land on the world of Arikein so that humans can negotiate and trade with the enigmatic Arikien- who the locals refer to as “The Hosts”.

“The Hosts” are strange even in comparison to other aliens. China Mieville’s prose makes it hard to actually get a good grasp of what these things look like, but how I imagine them is a fleshy pink-squid thing like H.P. Lovecraft’s “Elder Things”, but with hooves like a fleshy donkey and eye-stalks like Gary from Spongebob.

They also have two mouths and use both at the same time to speak- but that’s not enough to speak with them because they’re also partially telepathic and need a mental component behind the words for them to understand. In short, this means that humans can’t make the right noises, and robots are missing a vital “soul-like” component to be understood.

To solve this problem, Embassytown produces its own Ambassadors- pairs of twins so similar in biology and psychology that they can speak as one with the correct sounds AND produce the correct mental brainwaves to be understood by the Hosts.

And as if that wasn’t convoluted enough, this unique combination of linguistical challenges means that the Hosts cannot lie- not that they don’t try. In fact, they host a festival where they get up and attempt to say things that are untrue. This nature of thinking also means that they can only conceive things in a very literal way and require the creation of “similies” to express more complex ideas.

For instance, they will split a boulder and put it back together for the sole purpose of being able to compare things to the rock-that-was-broken-but-is-now-whole. Our protagonist, Avice, is honored by the Hosts when they request to turn her into a simile. An uncomfortable and downright painful experience, depending on what sort of simile they wish to canonize into their strange Language.

After traveling off-world for a while, Avice eventually returns to her hometown with her husband (and 4th such partner) Scale, a linguist, when a new Ambassador arrives in Embassytown. This itself is unusual since Embassytown usually grows its own Ambassadors, and the new Ambassador, a duo, collectively named EzRa, are not twins. Just friends who scored well on the exam, which is incredibly rare. All is well and good upon their arrival… until the Hosts hear them speak for the first time.

Then everything goes to hell.

As far as the world and setting go, Embassytown is probably one of the easiest to dive into. There are only a handful of factions and main characters to get to know, and only one alien race is being dealt with (two others are named and mentioned but never described). The technology is fairly standard science-fiction technobabble stuff, although it takes a chapter or two to realize it.

The focus of this novel is almost 100% on The Hosts- their Language, their society, and the unintended consequences of cross-cultural interaction. Unlike all of Mieville’s other works, which feel like a shotgun blast of weird insanity explored fairly shallowly, Embassytown takes a handful of ideas and extrapolates them to their full extent. In this way, Embassytown is probably one of the most fleshed out and internally-consistent Mieville stories I’ve read to date.

That’s not to say this novel is very approachable. Unlike Kraken or even Perdido Street Station, Embassytown has a bad case of “Proper Noun Vomit”. It really throws you into the deep end by immediately throwing around terms like “Terre”, “Immer”, “The Out”, “Manchmal”, “Biorigged”, and “People”.

On top of that, the novel starts in medias res with the arrival of Ezra, then jumps back into Avice’s history, and forward, and back, and forward again. To make matters even more confusing, time is referenced either relative to Embassytown’s years (which are far larger than Earth’s) or in standard spaceship units of Kilohours.

So when Avice mentioned getting married at 11 years old, I was thrown for a loop until I realized that she was actually an adult. And when she mentions events that happened several kilohours ago, or characters being half a megahour old, I had literally zero idea in my head about how much time that actually was.

One thing I haven’t mentioned so far is characters. And, well, they’re kind of meh this time around. Avice is kind of an unappreciative jerk, Scile is enthusiastic and passionate, but not much else, and none of the other characters really get a chance to shine on their own (most of the diplomats feel identical- ironically). The vague prose and confusing, in-world descriptions and referring to all diplomats as “they” since they come in pairs made it hard to even visualize half the cast. I didn’t even realize Avice was a woman until after the first ten-to-fifteen pages.

Overall, I’m not really sure where I’d rank Embassytown compared to Mieville’s other books. Embassytown is a rather grim story once you get past the initial weirdness and is actually fairly low on the weirdness scale overall.

While I enjoyed Kraken more, Embassytown’s proper beginning, middle, and end make for a more coherent story. I certainly enjoyed it more than Iron Council, but that’s not a high bar, in my opinion. So it’ll probably go somewhere in the middle.

On the one hand, the more traditional format theoretically means the story is more understandable than something like Kraken, but Embassytown throws the reader into the deep end with the Proper Noun Vomit and vague descriptions that I almost put this one down to read something else.

I’m glad I didn’t, but I had the advantage of already being a China Mieville fan to get me through. At the end of the day, it takes a certain kind of reader to enjoy his work, and you’ll either love it or hate it on that basis alone.