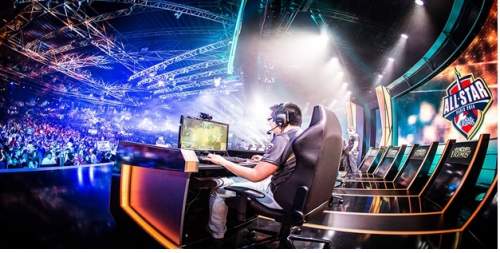 Esports for some, is a very new concept. Many people can’t believe people can be paid big money for playing video games. But esports has been going on for a very long time. And over the years it has evolved massively to the industry we see today. Even now, due to COVID-19 and new restrictions popping up over the world, the scene is still evolving and adapting to the world around it. So let’s take a little look at esports over the years.

Esports couldn’t have been more different way back in the day. The first recorded esports event took place in 1972 at Stamford University. But there was no Call of Duty or Rocket League back then, the game in contention at that time was a title called Spacewar. Students would compete in the tournament, all in the hopes of winning a year long subscription to Rolling Stones magazine. A far cry from the prize packets we see today.

It took until the 80s though for esports to really take off, when in 1980, the very first official competition took place. And it did so with one of the most popular games of all time. Space Invaders. Due to the popularity of the game at the time, it received a lot of media coverage, and ended up seeing over 10,000 participants, but only one could win it. That legend happened to be Rebecca Ann Heineman, who went on to be a videogame designer and programmer.

Ok, not the actual matrix. But the internet. It hit in the 90s which would lead to one of the biggest developments in video game history, allowing for competitive gaming to be done remotely between two people on opposite sides of the planet. It also saw the beginning of dominance between the main manufacturers of consoles in terms of Nintendo, Sega and Sony. Previous to that there were so many different consoles available from a wide range of names. But many popular household names such as Atari, Sinclair and others failed to continue their impressive form from the previous decades.

During the same decade, we saw prize pools increasing in value. Partly due to increasing popularity of video games, seeing sponsors coming in to competitions, but also thanks to the establishment of Cyberathlete Professional League (CPL). CPL was the first major gaming league organiser who would introduce professional gaming leagues and tournaments around the world. Their prize pools would hit the value of $15,000 in the late 90s, and it was probably the point where people thought it was possible to start earning a living from playing video games.

After bubbling under the radar of the majority of the public for several years, esports has exploded in popularity over the course of the last decade. Today’s events are much bigger in almost every way compared to those in the 80s and 90s. In fact, some esports events have become just as popular as some traditional sports, if not more so, and it has even gotten to the point that there are picks and odds for tournaments on specilalized betting sites, the so call bookies now follow electronic sports the same as they do with traditional sports.

But how has esports gotten bigger? We’re talking much bigger crowds, huge television audiences, blockbuster commercial deals and prize money for the winning teams and players beyond what the imagination ever thought possible. There are even now dedicated esports arenas and outlets who report regularly on esports news.

The 2020 esports calendar was packed with a whole host of events to take place all over the planet. But following the pandemic of COVID-19 and the global lockdowns that ensued, events around the globe were cancelled or postponed. We saw events like FIFA’s ePremier League being finished after the new season had started, and other tournaments changing the ways they operate.

No longer were people facing off on a stage in front of an audience. Instead, people were making the most of the internet, using it to host online tournaments. Which worked well for many, but did see issues pop up like unstable connections delaying matches and many players complaining that lag was ever present. Nowhere near as smooth as they would have been if played over a local area network.

This bizarre new way has become the new normal though. And it’s likely it will continue into the new year. We can only hope that we’re allowed back into arenas to see the best of the best compete, but until then, watching matches online will have to do. And despite all of this, the growth of esports doesn’t look like stopping any time soon. Because unlike traditional sports, you can’t really play football or rugby over the internet, so it has lead to a whole new audience who are looking to get some serious sporting entertainment on their screens.