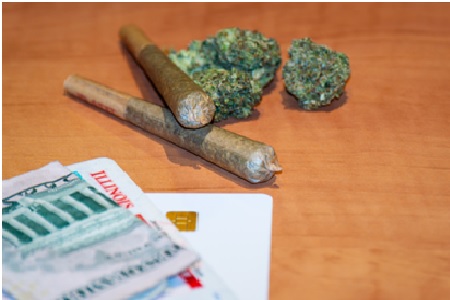 Slowly but steadily, all the states west of the Rocky Mountains have passed regulations for recreational, adult-use cannabis — but the rest of the country isn’t quite as progressive. The Midwest, in particular, has been slow to adopt new cannabis laws of any sort, which means those Midwesterners interested in trying weed legally typically need to travel for the experience.

Fortunately, there are a few Midwestern destinations that make legal cannabis a bit more accessible to outsiders. Here are the best tips for staying in the Midwest and sampling cannabis legally.

Only two states in the American Midwest currently harbor recreational, adult-use cannabis regulations: Michigan and Illinois. Second only to the Southeast, the Midwest has been among the slowest regions to change cannabis policy, likely because cannabis culture isn’t quite as pervasive in this part of the country. Michigan and Illinois, both of which have some of the largest and most diverse metropolitan areas in the region, have been successful at ushering in cannabis reform, and it is likely that the states surrounding them will slowly follow suit in coming years.

In Michigan, cannabis travelers want to stick to the southern half of the Lower Peninsula, around progressive cities like Detroit and Ann Arbor. Not only do these cities provide more tourist opportunities, like Belle Isle, the Fox Theatre or the Michigan Museum of Art, but they are also the most 420-friendly parts of the state. Visitors are most likely to find accommodations where consuming cannabis on-site is permitted — which is important given that public consumption is prohibited in the state — and plenty of interesting recreational dispensaries open and providing services.

In Illinois, Chicago is the best destination for cannabis seekers. Though some smaller towns near Illinois borders do permit recreational dispensary operation, most of the rest of the state has prohibited cannabis consumption. As one of the quintessential American cities, Chicago has plenty for non-stoned visitors to do during their trip, and increasing numbers of weed tourists from surrounding states has ensured that there are enough dispensaries, 420-friendly lodgings and weed-fueled activities to occupy a weekend or more.

By almost every metric, Oklahoma boasts the best medical marijuana program in the country. Unlike most other states, Oklahoma trusts physicians to recommend patients for cannabis treatment. Though the state does have a list of conditions that qualify a user for medical cannabis access, Oklahoma also opens dispensary doors to anyone deemed by their doctor to benefit from medical cannabis, which means many more patients can benefit from the healing effects of weed. What’s more, Oklahoma offers medical marijuana reciprocity, meaning those with medical cannabis cards valid in other states can apply for a temporary license to make purchases in Oklahoma.

On the very southern border of the Midwest, Arkansas is another state with practical medical pot guidelines — which has proven important for patients in neighboring states like Texas. Arkansas’ regulations aren’t quite as lenient as Oklahoma’s, but their list of qualifying conditions is remarkably lengthy. Plus, Arkansas also has reciprocity, so visitors can apply for temporary passes to medical dispensaries in towns like Texarkana.

Tips for Traveling for Cannabis

Regardless of where a traveler ventures in search of cannabis — be it the Midwest, the West Coast or a foreign country — it is imperative that outsiders understand local laws and customs. Taking the time to research cannabis regulations could ensure that tourists are able to partake in peace, without fear of legal ramifications. It might also be useful to talk to budtenders or fellow dispensary customers about consumption norms in the region. Getting to know the local stoner culture helps to expand one’s worldview, but it also ensures that resident weed enthusiasts are more accepting of outsiders when they visit.

Even in the least 420-friendly places in the U.S., there are cities that offer legal weed. The Midwest has some of the most interesting cannabis experiences in America, but travelers need to know where to go to find them.