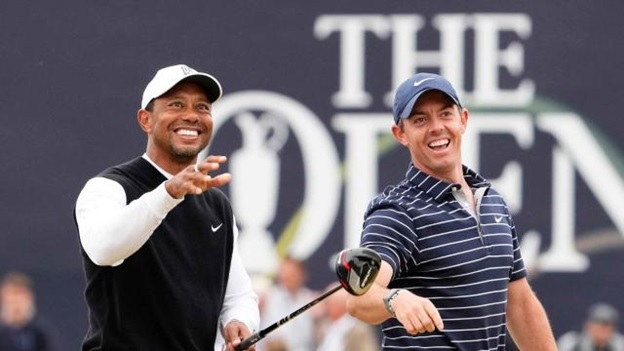 Tiger Woods and Rory McIlroy have revolutionized the game of golf with their respective styles of play, but the two have found another savvy way to change the sport for the better off the greens.

On Aug. 24, Woods and McIlroy’s TMRW Sports announced that they’re partnering with TGL to form “a new tech-infused golf league.” The PGA Tour will be serving as a partner for the new golf league.

Per the announcement, the league will consist of six teams, each made up of three players on the PGA Tour. There will be a “Tech-Infused Venue” featuring data and a virtual golf course, a “Tech-Enabled Fan Experience” that will offer viewers as well as a “High-energy, greenside fan experience.”

There will be 15 regular season matches that take place on Monday evenings. Playoff matchups (semifinals and finals) will follow. The season is currently scheduled to begin in January 2024. It’s worth noting that ESPN’s Monday Night Football NFL program will conclude by mid-January January, so the new virtual golf league won’t be competing with the NFL throughout the season.

Ever since sports betting was made legal by the Supreme Court of the United States in 2018, golf has been one of the top sports that customers can place wagers on through major betting sites like FanDuel, DraftKings and BetMGM.

Through these sportsbooks, you can place wagers on your favorite golfers to win specific tournaments/events. For example, McIlroy has the best odds of winning the 2023 Masters at FanDuel (+1000) and Woods — a five-time winner of the tournament — has +3600 odds.

The new virtual golf league will be part of the PGA Tour. The annual golf schedule consists of four majors: The Masters (held annually in April at the Augusta National Golf Club), the PGA Championship (held in May), the U.S. Open (June) and The Open Championship (also known as “The British Open”) in July.

So the new virtual golf league should serve as a nice start-up for the season as avid PGA fans await the start of the historic Masters tournament.

Woods, often regarded as the greatest golfer of all-time, has won 15 majors. After going 11 years without winning a major, Woods pulled off a historic comeback story by winning the 2019 Masters.

Only Jack Nicklaus (18) has more than Woods. McIlroy is a four-time majors winner, needing just one Masters victory to clinch the Grand Slam. He won the PGA Championship in 2012 and 2014, the U.S. Open in 2011 and The Open Championship in 2014.

A Response To The Start-Up Of LIV Golf?

One of the most talked-about sports stories of 2022 has been the start-up of the LIV Golf tour that will serve as competition to the PGA.

The new virtual golf league led by Woods and McIlroy is being widely viewed as a way of fighting back against the LIV Golf tour.

The tour has managed to recruit some of the world’s most well-known and accomplished golfers. Phil Mickelson, a six-time majors winner, was among the first notable names to sign up with LIV Golf. Brentley Romine of the Golf Channel reported that Mickelson’s contract with the tour is worth $200 million.

Several PGA Tour golfers who signed up with LIV Golf were suspended by the PGA indefinitely.

In August, Norman claimed that Woods received a $700-$800 million offer to join LIV Golf, which was turned down. McIlroy has also publicly criticized LIV Golf, claiming that the “world of men’s professional golf is ripped it apart” by the tour.

16 months away. The countdown for the new Woods and McIlroy-led virtual golf tour is on.